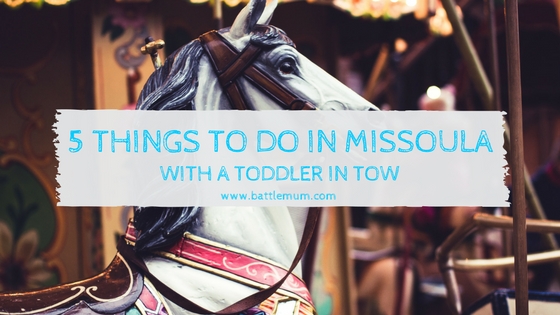 Last year, as many of you know, we embarked on our biggest trip to date with BattleKid. It was a two-week USA road trip taking in the stunning Yellowstone National Park, smoky Missoula in Montana and the hip and vibrant city of Portland. Missoula is a place not many people will have heard of, us included before our trip, but is definitely worth a visit. And today I’m going to share with you 5 things to do in Missoula with a toddler in tow, should you be visiting yourself with a toddler or young kids. END_OF_DOCUMENT_TOKEN_TO_BE_REPLACED

BattleKid and I woke shortly after 7am and chilled in the living room with the help of Puss in Boots, the series, on Netflix. I managed to catch up on some writing before BattleDad appeared shortly after 8am.

Again, we watched a deer in the garden but this time she had two babies with her. I made us all an omelette for breakfast, and then we packed a picnic and headed out on the road, bound for somewhere else we’d seen in the information magazines our host had left. We needed an ATM as we were all out of cash and found one near a Cabela’s Outdoor Store. BattleDad had played the Cabela’s PC games many moons ago and really wanted to go inside. So, we did.

Oh my word, this was another experience. Cabela’s is a huge store with the outdoors firmly in mind. It was bigger than some of the Asda shops of the UK. There were sections for fishing that my Dad would have gotten lost, a camping section and the biggest range of guns and ammo I’m ever likely to see for a very long time.

There was also a section designed for ski and winter wear. By the end of September, Montana sees snow and temperatures that can drop well below freezing. I spotted some trapper hats for BattleKid and I. I snapped them up, all in preparation for our trip to Lapland in 2018. We also got BattleKid a much better set of nocklers, with the help of a very friendly staff-member. As we were paying for the hats, the lady on the checkout asked were we getting ready for winter. Sort of we responded, haha.

Satisfied with our purchases, we set off. Our destination was the Garden of a Thousand Buddhas, located near Arlee which we had passed through the day before on our way to the National Bison Range. It took us just over 40 minutes to drive there and we parked in the car park and walked to the Garden.

And what a beautiful place to visit in the middle of Montana. The Garden of a Thousand Buddhas has exactly that, 1000 statues of Buddha in various sizes, set in 10 acres of beautiful gardens. Still under construction, this spiritual site on the Flathead Indian Reservation is intended to be a place of pilgrimage for the Western Hemisphere and expected to welcome people of all faiths in the future.

It was one of the most peaceful, serene places we’ve ever been. One of our longest friends in Wales introduced us to Buddhism many years ago, and although we are not Buddhists, we appreciate their way of life and much prefer their teachings and morals over the religion we were brought up in.

The gardens were beautiful, there was a lovely little lake and also a set of prayer-flags on a hill. Had we known before we visited, we’d have brought one to add to the ones there. The Garden of a Thousand Buddhas is free to visit but there are donation boxes there, which we put some money in. I was glad we had stopped at the ATM at Cabela’s. We thoroughly enjoyed our quiet walk through and around the garden.

Back in the car park, we started talking to a guy and his friend from the car beside us. Nate, a very nice guy from Utah, was really friendly and has since become friends with BattleDad on Facebook. He was interested in why we’d visited and our travels. Nate was also interested in recommendations for Irish films to watch once he learned we were Irish, and he gave us some great recommendations for Portland.

Before departing, he gave us a bunch of lavender as a gift, which we weren’t expecting but was a lovely gesture. Lavender is the essential oil our Buddhist friend used to use on us during our sport therapy treatments with her. It felt like something had come full circle for us. All we could offer him was some bottles of water, as we had a case of it in the car. Both Nate and his friend were very grateful as the temperatures were over 30C that day and they had run out.

We headed back to Missoula and located Caras Park, where two children’s attractions that had been recommended to me were located. We had a picnic first as it was lunchtime, before BattleKid and I enjoyed some rides on the Carousel for Missoula, where an adult and child can share a seat for just $1.50.

A volunteer-built, hand-carved carousel in Caras Park, Carousel for Missoula was completed in 1995 but not without the efforts of many volunteers and fundraising. Cabinet maker Chuck Kaparich from Missoula visited a carousel in Spokane in 1988 and it was there the vision for a carousel in Missoula was born. However, it took a lot of fundraising, over 100,000 volunteer hours and four years before the carousel was completed. The carousel has 38 hand-carved ponies and two chariots and hosts over 200,000 rides a year.

After our rides, we let BattleKid run off some energy in the Dragon Hollow Playground, which he thoroughly enjoyed. Created in just 9 days with the help of over 4000 volunteers, Dragon Hollow Park is a playground adjacent to the Carousel for Missoula. Free to use, it has castles, slides, swings and plenty of hiding places for kids to let off some steam. Thanks to those on Facebook for these recommendations.

On our way back to our AirBnB, we stopped by Walmart on the way back to our AirBnB to get a pizza and some American croquettes called Tater Tots. BattleDad had always wanted to try them, and they were tasty. Back at the apartment I got packing us and tidying up while the boys played and chilled with Netflix. After dinner we watched Zootopia with popcorn before getting a little boy into bed. After another two episodes of Ozark, BattleDad and I were in bed, ready for another long day of driving, the penultimate leg of our road trip.

Another month, another chance to reflect on the month gone by and see if I managed to get in front of the camera instead of just behind it. And I have been pleasantly surprised that I did, albeit mainly thanks to BattleDad.

We started September en route to Missoula having left wonderful Yellowstone. This was the next destination on our USA road trip before moving on to Portland. While in Missoula we visited the National Bison Range in Montana, in the hope of spotting more wildlife. We had fun and ended our day out at the Carousel for Missoula. BattleKid and I had a few rides after our picnic and he thoroughly enjoyed it.

While in Missoula we visited our first ever Walmart and BattleKid was treated to new some Disney Cars models. However, they were a nightmare to get out of their packaging. Why do toy manufacturers do this to us? And BattleKid and I got our hats for Lapland in December 2018.

After an enjoyable few days in Missoula we headed for Portland through nearly 600 miles of smoke haze. We even had to go around Mount Hood as I-84 was closed due to fires around the Columbia Gorge Creek.

In Portland we had a lovely relaxing few days, all with BattleKid in mind. We visited Oregon Museum of Science and Industry, Oregon Zoo and also the Children’s Museum. On our last day we ventured into downtown Portland and enjoyed ice cream at Salt’n’Shake, which had been recommended to us. We also ate at a place called Red Robin no less than 3 times during our stay. The food was that good!

Back in Portugal we ventured to the Algarve Circuit at Portimao for our first ever World Superbikes Race. It was a glorious day to watch some motorbike racing. We’ve also enjoyed dinner outside again, with BattleKid falling asleep before we’ve even finished our meal. We’ve been playing in the garden with BattleKid’s new pirate ship water table and discovered the playground on our park. A busy but thoroughly enjoyable month.

Be in the Picture encourages us to get in front of the camera instead of always being behind it. I’m guilty of this and by joining in with Be in the Picture, it ensures BattleKid will have pictures of me as well of himself when he grows up.