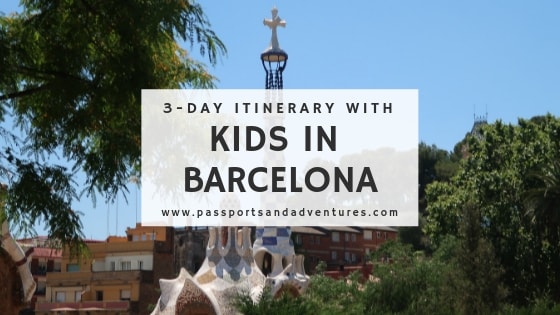 Today I have the pleasure of welcoming a fellow travel blogger Justine, from Latitude 41, who has a great 3-day itinerary with kids in Barcelona for us. We are shortly heading to the Spanish city so I’m so pleased to have Justine’s hints and tips for visiting the city.

END_OF_DOCUMENT_TOKEN_TO_BE_REPLACED

After very little sleep, my alarm went off at 4.45am UK time. Bleary eyed doesn’t even cover it. I got up and helped BattleDad sort our bags before he walked BattleDog. I got BattleKid up and dressed and we loaded the car back up, full to the gills. We set off at 5.25am to make our way out of the beautiful mountains of Northern Spain to head South, down the backbone of Spain to Portugal.

I had to admit the windy roads of the mountains did nothing for my stomach, making me reminisce about Tenerife. It took us over two and a half hours to get out of the mountains and find flat roads as we started to make our way to the A67, which we finally joined just above Osorno. To be fair we had gone through some amazing countryside, some of the likes we would never have expected for Spain.

We started searching for a services to stop at and grab some breakfast, but we soon discovered that Spanish services are not located at the side of the motorway. The first one we eventually found was more than 2 miles off the motorway! I walked BattleDog while the boys headed to the toilets before we finally sat down to bacon sandwiches (not the UK type) and a cuppa. The services were ok and we filled the car to ensure we had plenty to get us to the next one.

We had made that rule when we stopped outside Santander, and I was glad we had filled up there instead of hoping we’d have enough in the tank, as the journey out of the mountains used up quite a bit of fuel.

Bellies somewhat sated, we drove back the 2 miles to rejoin the motorway and carried on for another two hours. Somewhere before Valladolid, we diverted into a small town to fill up again with fuel. Here, an attendant filled the car, and BattleDad later wondered if she had put the right type of diesel into the car. More on that to come, keep reading.

Just outside this town, we eventually came across more motorway-type services so we decided to stop here for lunch and a toilet break for both us and the dog. The food here wasn’t great but it filled a hole. We didn’t need to fill the car as it hadn’t been long done. BattleDad said he’d carry on driving for a while longer before handing it over to me so he could get a snooze.

Literally minutes outside this services, the car went into restricted performance mode, we lost power and had a bright red engine warning light on the dash. Cue serious amounts of panicking from me. We hadn’t even passed Salamanca, had over 400 miles to go and all with a car full of belongs, dog and child. This is not what we needed right now. My panicking didn’t help the situation either.

BattleDad had a diagnostic plug-in tool with him that linked to his phone to check the error and it said something to do with the Turbo. He cleared it and said we could probably carry on but keep the revs under 2k and the speed steady to reduce our chance of the turbo kicking in. We had been making really good time, I’ll say no more, and our ETA started extending now.

An hour later we swapped over and I got my first taste of driving on the wrong side of the road. It was ok as it was motorway the whole way, so only two lanes and intermittent vehicles to worry about. We drove through some horrendous storms too as we headed South. We were really surprised as the saying “the rains in Spain fall mainly in the plains” was coming true.

After an hour BattleDad woke but I carried on, just hoping to get us to Tavira without any more hiccups. I drove us nearly 300 miles to the other side of Seville before we stopped for a toilet break. We decided not to eat as we were only an hour and a half from my parents place and I knew my Dad would be getting dinner ready for us.

BattleDad took over and just before we crossed the Spanish/Portuguese version of the Severn Bridge we got another repeat of restricted performance and red engine light. I wasn’t as worried this time as we were closer to Tavira but I was still worried. BattleDad cleared it again and we crossed the bridge into Portugal.

We came across a road block and found border patrol checking documents in some cars. Needless-to-say the UK number plate meant we were pulled over too. BattleKid was asleep and the border patrol office just checked our passports and sent us on the way. Had he opened the boot he’d have gotten a black surprise in his face.

We finally arrived into my parents place near Tavira at 6.15pm, after 13 hours on the road. Both exhausted and relieved we’d made it, I was so glad to get out of the car, unpack and sit down.

We were here, we’d arrived and our journey to start our new life in Portugal had come to an end, nearly 56 hours after we had left South Wales.

BattleDad, BattleKid and I were early to bed that night after a very long day and none of us arose until well after 9am, which is almost unheard of…..

If you missed my previous instalments of The Portugal Diaries you can read Part 2 and Part 3 again.

As we headed into the mountains of Northern Spain to find our accommodation for the night, BattleDad and I commented that they would remind you of the Alps. They were very lush and green, not really what we had been expecting at all. We rather enjoyed the roads heading towards our accommodation, but I was quite worried about arriving in time to feed BattleKid as it was already past 8pm Spanish time when we headed into the mountains.

We were following a river along a road when BattleKid started crying saying he wanted to get out. Around another corner, he started getting sick. We pulled over beside a bridge across the river and I changed him quickly, thankful he had managed to avoid his car seat and tablet which he had been watching. No more Curious George in the car.

Google maps was telling us we had passed the turn off for our hotel, so we turned around and headed 20 minutes back the way we came, only to start going down country and dirt roads, with no sign of a hotel at all. We stopped along one dirt track, let BattleDog out to do his business, and checked the actual address of the hotel, rather than the Google maps which had been sent in our confirmation email. Lo and behold, our hotel, was back the way we had just come from. Typical. This always happens to us!

We followed the new address and you couldn’t make this up. Where was our hotel? At the bridge  where we had stopped at when BattleKid had gotten sick. We had been right beside it and never realised! BattleDad said afterwards he had thought the building beside us had looked rather nice. Only us, it could only happen to us!

At this stage BattleKid had fallen asleep, so we stopped the car beside the hotel and went inside to check in and get our bearings. The manager was most helpful, telling us where our room was, directing BattleDad to the parking ( a very short walk away from the front door) and telling us we had time for dinner as it was well after 9pm.

We got BattleDog and BattleKid upstairs and were wowed even more by our room. The hotel, Casa del Puenta, which I plan to write a review of soon, was simply stunning. An old renovated building, it had exposed brickwork and beams and just screamed character. BattleKid didn’t wake up as we moved him upstairs so I changed him into his pj’s while BattleDad sorted the dog and our bags. We put the Baby Monitor app on my phone and went downstairs to the restaurant.

We joked that it was our first ever dinner date since before BattleKid was born but it was true! We ordered Sea Bass with Garlic and some water, and my god it was so tasty. It was thoroughly enjoyed after the trip we’d just had. Dinner, which included some homemade breads, and our drinks came to the grand total of just €26. Bargain.

The owner had checked with us as we checked in what time we would be leaving and was a little shocked when we said 6am. Breakfast was between 9 and 11am so we would miss it. He very kindly arranged for the chef (who I assumed was his wife) to make us some sandwiches. She had these ready for us as we paid our bill, as well as some fruit and orange juice. We were totally bowled over by their kindness as they didn’t have to do that at all. You certainly wouldn’t get that level of service in most other places.

After dinner, I sorted out our bags, while BattleDad walked the dog one last time and then I joined BattleKid in bed. I couldn’t sleep much as the street light was beaming in through the window. The next morning, I discovered there was a shutter on the inside which I had missed in the dark. Typical! Had I just turned on the light I’d have gotten some much needed sleep. Oh well, lesson learned.

I had set my alarm for 4.45am (UK/Portugal time) to ensure we were on the road early. It was going to be a long day with just over 600 miles to cover…..

If you missed my previous instalments of The Portugal Diaries you can read Part 1 and Part 2 again.