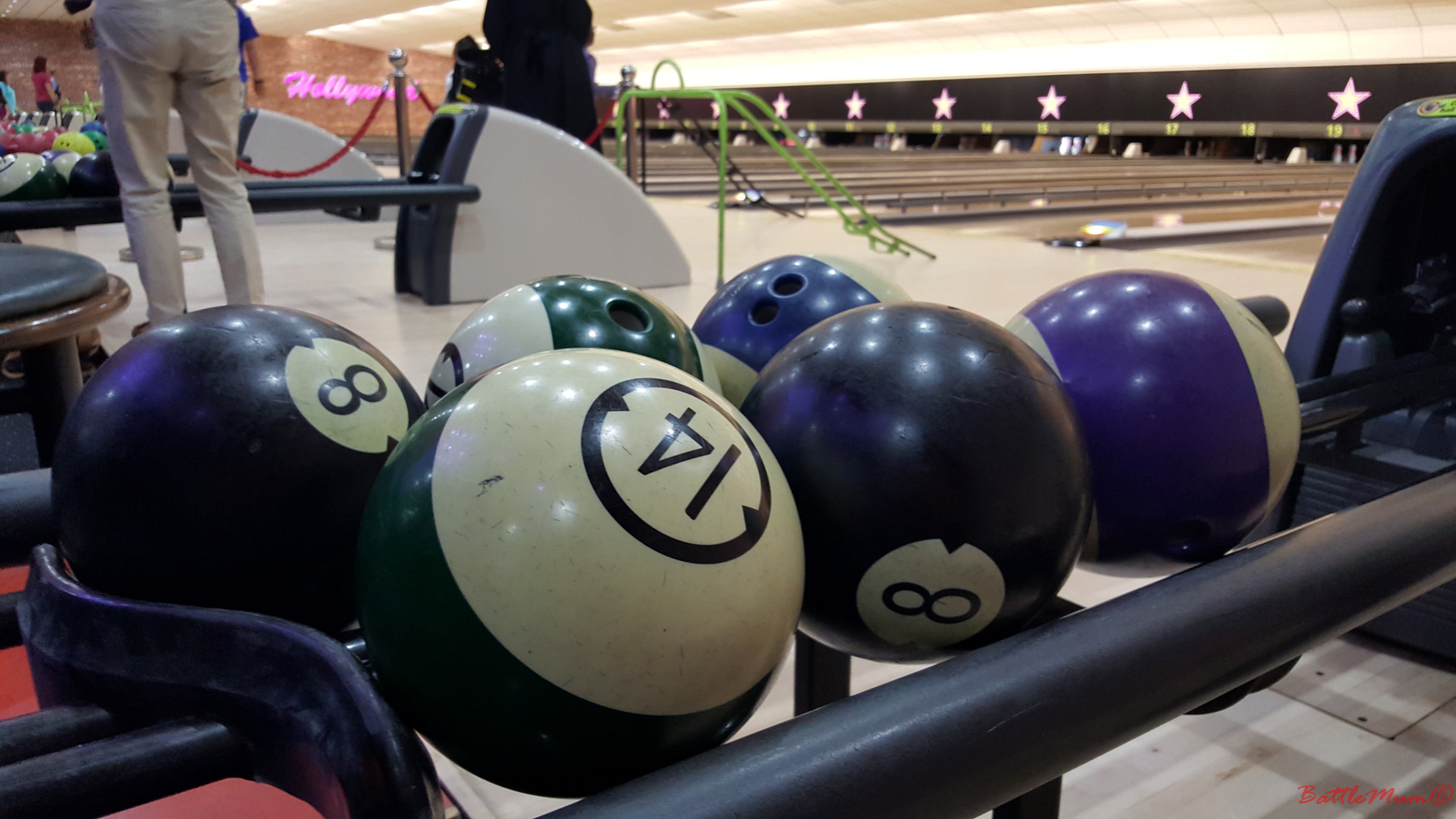 Last weekend we were kindly invited down to the Hollywood Bowl in Cardiff in the Red Dragon Centre for a game of bowling and some food. Now, it’s been a number of years since I’ve been bowling and to be perfectly honest I hadn’t been overly impressed by the Hollywood Bowl the previous time I’d been. I was also apprehensive about taking a 2 year old bowling and whether he would get bored with it. But I need not have feared.

Firstly, the Hollywood Bowl in Cardiff has had a complete make over and looks nothing like it did 5 or 6 years ago when I last went with work. Gone is the drab interior and sticky carpets. The Hollywood Bowl in Cardiff is now modern, fresh and really cool now. We arrived shortly before our 11am slot and made our way to reception where we were greeted by our Lane server, Morgan. Also new, and a surprise to us, was the fact we didn’t need to don bowling shoes as we were all in flat shoes so could remain in our own shoes. This was a first and the set of socks I’d stashed in BattleKid’s change bag weren’t needed after all. I think this is quite a good thing, so be warned, if you are in heels you will be required to change shoes, so go in flats of your own ladies After checking in at reception we were shown to our VIP lane, number 26, which is the last lane and was a nice quiet one out-of-the-way. The VIP section consists of four lanes with coloured pins, more comfortable seating than the other lanes and with more professional bowls as well. With them being out-of-the-way they are ideal for families wanting some quiet time or if you want to be away from possible parties. That said you could also hire them for a party if you wanted and they don’t actually cost too much more as I’ll explain later. Morgan put our names into the computer and once we got settled, we were soon all set for our game of bowling. BattleKid wasn’t sure at first but as soon as he saw someone in a lane nearby knocking down the pins with their ball he shout “crash” and wanted to do the same. We used the ball launcher and had the sides up for him and off he went. He couldn’t quite understand why we had to take turns and in the end we let him take most of the turns to save having a tantrum. To be honest we didn’t mind at all, we just had to have patience while he decided which ball he wanted to use, all based on colour mind you, not weight! I have to say I was very impressed with our server, Morgan, as soon as she realised BattleKid was taking all our goes she asked if we wanted the bumpers up permanently and we said that might be best. Each lane, VIP or regular, has a dedicated lane server to get you drinks and food if you want, handy for parents who might not want to leave their children unattended. There are also ample ball launchers for younger children or wheelchair users (there was a wheelchair users using one in a lane near us). The lanes are wheelchair friendly with ramps for chairs and plenty of space around them.

During our game the manager, Keith from Dublin of all places, came over to say hi and to make sure we were being taken good care of, which we were. Morgan had brought us over our drinks and sorted out the bumpers for us without us having to ask. Halfway through our game the lighting on the lanes was changed and it looked mightily impressive, very cool I have to say. BattleKid thoroughly enjoyed his game of bowling, with a little help from mum and dad at setting up his balls for him. He enjoyed pushing the balls down the launcher and watching the pins being knocked down, all accompanied by shouts of “crash”. He even managed to get a few strikes which was more than what mum and dad may have managed had we been allowed to take our turns. We were both very surprised that his attention was kept for the majority of the game as we were sure he’d lose interest before we’d gotten halfway through. Who knew a game of bowling would be such a hit with a two year old!

As I’ve mentioned the new decor is brilliant and the Hollywood theme is evident throughout the Hollywood Bowl in Cardiff, with Hollywood stars on the lanes and floors, and pictures of famous actors and actresses decorating the VIP section. As we neared the end of our game Morgan came to take our food order to ensure it would be ready once we’d finished our game and were ready to move to the diner. We were given the option of eating at our lane but we thought it would be best to sit at a table with BattleKid. The diner in the Hollywood in Cardiff is called Harry’s and has a good number of seating available with booths as well as comfy chairs. We were seated in a booth and our food was with us in minutes. It was nice and hot when it arrived and looked great. BattleDad chose a Sloppy Joes Burger while I went for a Chicken Caesar Salad and we asked for a children’s chicken nuggets and chips. I have to say the food was really tasty and fresh. BattleDad’s burger was delicious and BattleKid’s chicken nuggets were really yummy, made from fresh chicken too. BattleDad commented that his fries were tasty and the burger and bun were really good quality.

Another plus was our drinks. BattleDad and I went for lemonades and were glad they actually tasted of lemonade, while BattleKid had an apple juice. They weren’t watered down like some fast food chains. Another thing I’ll say about the food at the Hollywood Bowl in Cardiff is the menu is quite good and the portions are generous, they don’t skimp on food quantity. While my salad was nice and tasty I ended up wishing I’d gone for the Empire Burger as recommended by Morgan, but there’s always next time (and there will be a next time).

After we finished our lunch, and after we had high-fived the Hollywood Mouse (see below), BattleDad brought BattleKid into the arcade while I spoke to reception to get some information on prices (see below). We had promised him a ride on the car at the entrance so off the boys went while I got the particulars. Once I’d spoken to the girl at reception I joined the boys and did one car ride with the boy before we headed to the Lightening McQueen car for BattleKid to have a go in before we headed home. What we liked about Hollywood Bowl in Cardiff:

What we didn’t like about Hollywood Bowl in Cardiff:

I have to say our experience of the Hollywood Bowl in Cardiff was nothing like I’d envisaged and was a thoroughly enjoyable outing for us. We hadn’t been sure of what BattleKid would make of it all, given he is only 2, but he enjoyed himself and to our surprise his attention was kept throughout the game of bowling. He was really well-behaved and even got a strike sticker from Morgan for his efforts. Stickers win all the time.

Thanks again to everyone at the Hollywood Bowl in Cardiff for a very enjoyable first game of bowling with BattleKid.

2 thoughts on “Hollywood Bowl in Cardiff – Our Visit”