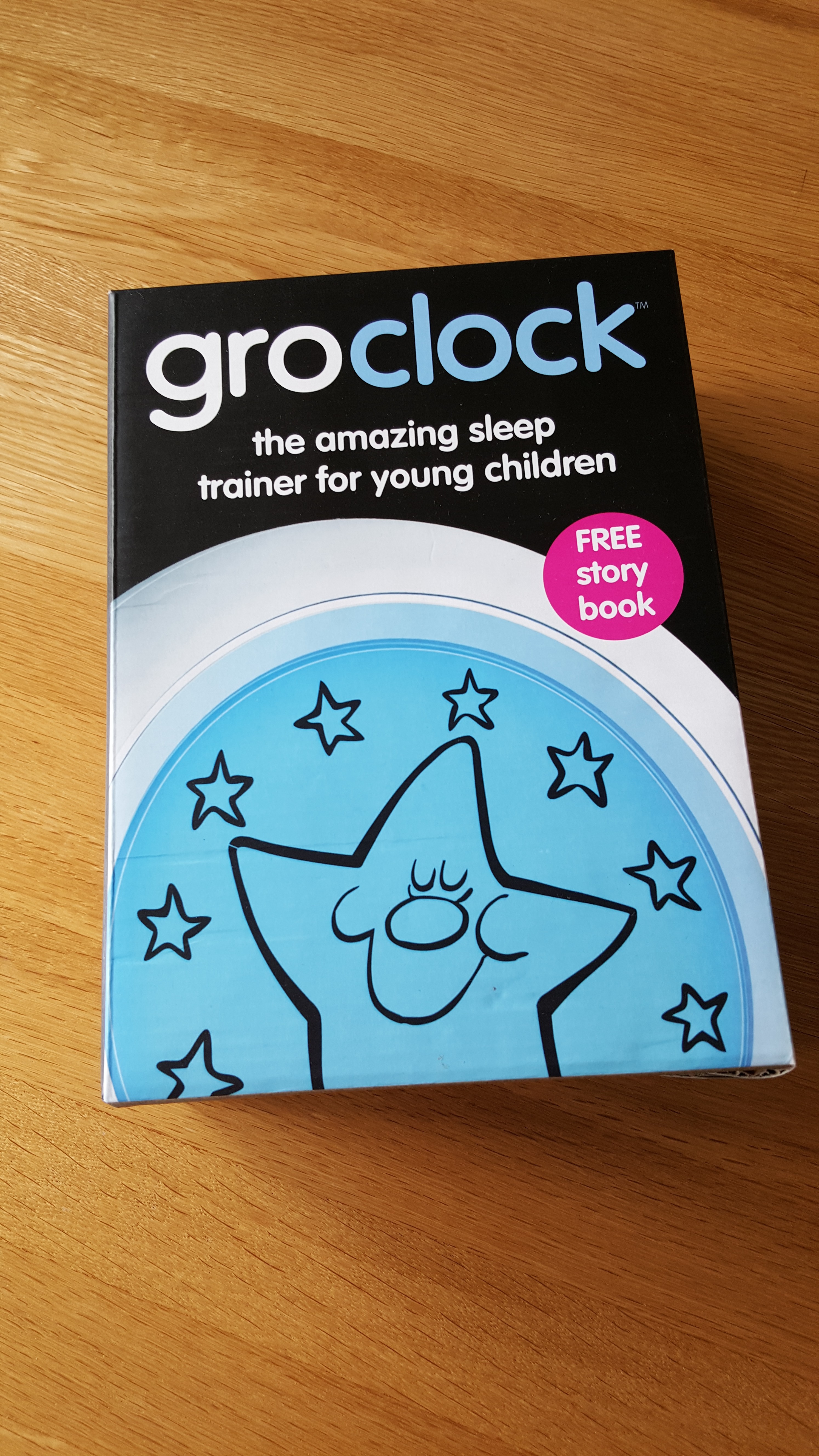 We were kindly sent the Gro Clock earlier this month to road test by the Gro Company. Hailed by many, including one of my personal friends, as the best product they’ve invested in for helping to ensure their little ones do not get up too early, I was a little apprehensive as to how the Gro Clock would be received by BattleKid, bearing in mind he is only 20 months old. Well, I need not have worried. The Gro Clock has slotted into our nap and bedtime routines very easily and has had a huge impact on making those times less stressful than they were not so long ago.

You see, BattleKid had started having major tantrums when we brought him upstairs for naps or bedtime. He would properly kick off. He would also cry as we put him in his cot and when we closed his bedroom door. I can now report that since installing the Gro Clock in his bedroom the tantrums have greatly reduced with just an occasional whimper as we leave the room. How have we managed this change you ask? It’s simple really – the introduction of Mr Sun and Mr Star. Mr Sun is a bright, cheery yellow sun who denotes wake-up times and daytime. When we see him we wave and I’ll say “Hello Mr Sun” or “Good morning Mr Sun”. BattleKid waves hello and smiles and he knows it’s time to get up in the morning when he sees him. If we go up to his room for anything other than sleep, so long as he sees Mr Sun and we say hello, he knows I’m not going in there to put him to bed. Heading upstairs and into his room used to start the tantrums off. Now we look for Mr Sun and BattleKid remains calm and relaxed. At night, or nap time at the weekends, we go into his room, and after I’ve pressed the magic button, we say “Bye-bye Mr Sun” and watch while he winks, closes his eyes and makes way for blue, sleepy Mr Star. When Mr Star appears and closes his eyes we say “Hello Mr Star, it’s bedtime”, to which BattleKid will wave night-night to him, like we do the BattleDogs every evening. We then get our kisses and cuddles from BattleKid and just before we put him into his cot we say “Night-night Mr Star”. Since bringing this into our bedtime routine BattleKid will now actively look to get into his cot, without the protests we were getting, ready for his story (or nap if during the day). He is calmer and more settled getting into his cot than before meaning we are less stressed as parents and it has resulted in happier, calmer bedtimes in the BattleHousehold. Also included with the Gro Clock is a story book which introduces the Sun and the Star too, and we’ve taken to reading that to BattleKid at night before a second story. It’s a lovely little illustrated book with a nice story which even BattleMum enjoys! The Gro Clock is packed with lots of features. Firstly, as mentioned, we have Mr Sun which denotes wake-up time and Mr Star who denotes sleep time. Both images are fun and will appeal to children of all ages. Mr Sun is bright and cheery as you’d expect while Mr Star is blue and sleepy. Mr Star is surrounded by 12 little stars who disappear one by one during the ‘sleep’ time phases to show the passing of time. I think this feature will come into its own and become invaluable as BattleKid gets older and understands the concept of time more.

You can choose to display the digital time or not, handy for helping to teach older children the time. You can also set the brightness of the display to suit you. I’ve chosen the lowest setting and during the night this is ample for the Gro Clock to act as a night-light.

You can set two separate wake-up times for weekday/weekend or night-time/day-time naps, although I still have to set up the second wake-up time. The Gro Clock is silently operated and you have the ability to lock the keys, very important and handy with an inquisitive toddler about!

The Gro Clock is mains operated so you will need to think about the placement of it. I’ve set ours up on BattleKid’s shelves next to his Gro Egg while he remains in his cot. He can see it from his cot but can’t reach it. Once we move him into a bed I’ll move it so he can see it better from his bed. The Gro Clock also conforms to the highest British and European Standards, big pluses in my scientific books, as with all Gro Company products.

The Gro Clock has a great built-in energy-saving mode so although it is mains operated you don’t need to worry about energy consumption. How is the Gro Clock energy-efficient? It uses LED’s which are naturally energy-efficient and 1 hour after Mr Sun comes out the display turns off the coloured LED’s and runs on just a tiny amount of electricity. Genius! You can turn the display back on with just the touch of one button. There is also an audible alarm whose time can be set separate from the wake-up times but I’ve yet to use this feature.

What we love about the Gro Clock:

Although it is stated that the Gro Clock is suitable from age 2+ years, we’ve been using it with 20 month old BattleKid and he has responded brilliantly to it. Our nap and bedtime battles have all but ceased and the Gro Clock has slotted so easily into our bedtime routine. I was apprehensive about whether we’d see any difference in BattleKid at bedtime with him only being 20 months old but it’s made a world of difference at bedtime in a very short space of time. The Gro Clock is a great bedtime aid and is a product I can see coming more into its own as BattleKid gets older and as he moves from cot to bed.

So if you are having a battle of wills at bedtime like we were, why not see if the Gro Clock can help ease them like it has for us.

*We were kindly sent the Gro Clock for the purpose of this review. However, all the opinions expressed about the Gro Clock in this review are wholly my own and have not been influenced in any way other than by our experience of using it.

2 thoughts on “The Gro Clock: Our Review”