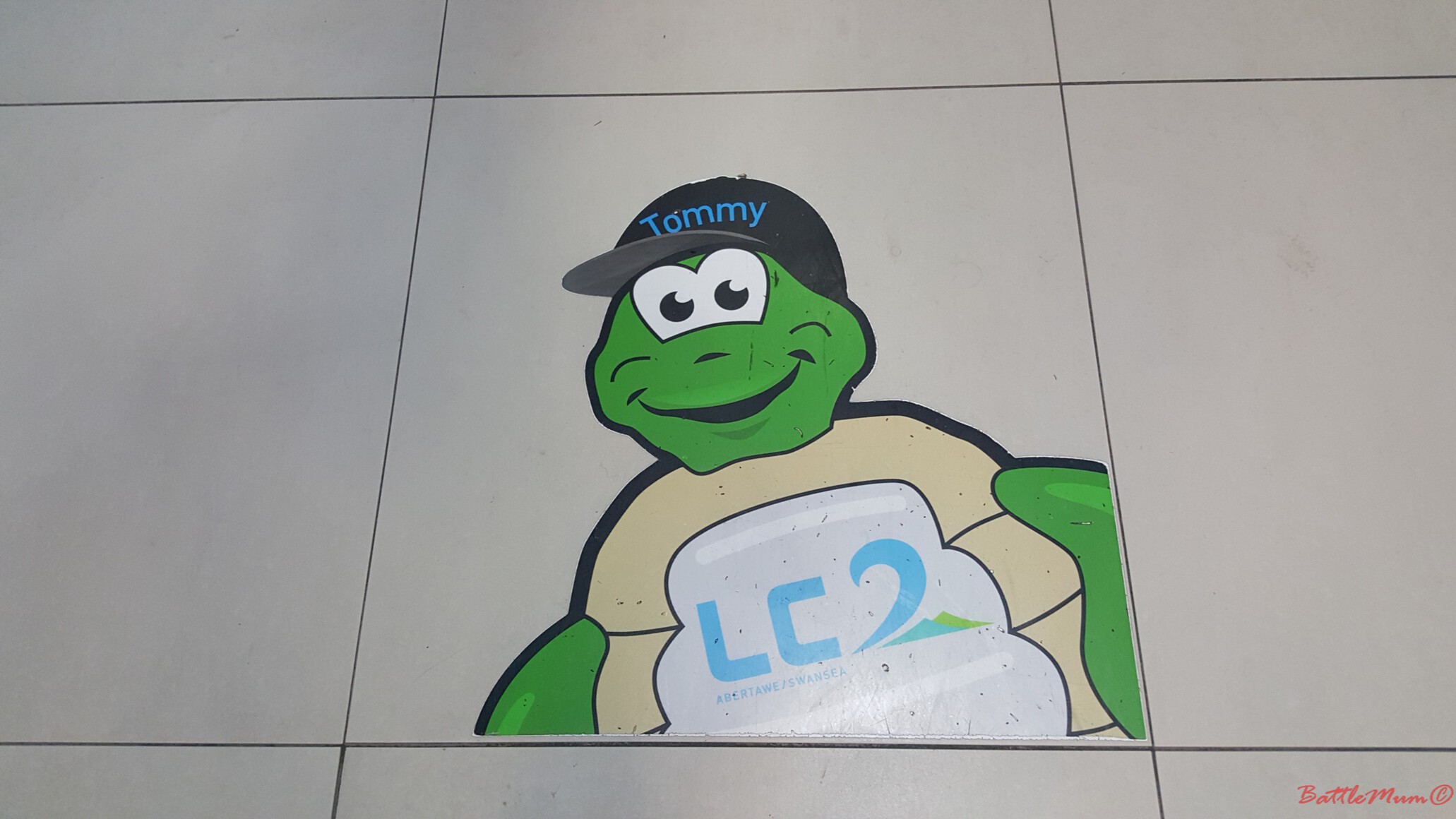 Last weekend we were kindly invited* to the Leisure Centre in Swansea, LC Swansea, and received complimentary entry to the Waterpark and also the soft play. BattleDad was originally meant to come along with BattleKid and I but a work trip to India meant he couldn’t. So I invited along S and her son L (of the Bluestone Diaries) to keep us company and to get another person’s opinion as well. For our visit to the LC Swansea we arranged to arrive at 10am and both myself and my friend got there just before 10. S’s husband W came along to help S with L in the changing rooms and to take over for the soft play as she had been suffering from a nasty cold last week which has hit her hard during her second pregnancy. We made our way to reception after parking in the pay and display car park beside the LC Swansea.

When we arrived to check in the girl on reception couldn’t find our booking. It turned out the lady I had been speaking to had booked it for the weekend before. However, it was not a problem and we were given our tickets for the pool and soft play.

We hit the changing rooms and found two huge family sized changing rooms beside each other and got ourselves ready to hit the pool. We were given bands which allowed us two hours in the waterpark and after stowing our bags, headed for the toddler pools. The waterpark itself is huge and we didn’t get to see all of it as we had the boys (aged nearly two and almost three) with us but the areas that we did see and use were really clean and modern. I didn’t get pictures of this area myself for privacy reasons. The toddler pool entertained the boys for ages. There was a slide which was the biggest hit with them, pipes with waterfalls and a tipping bucket which frightened the life out of BattleKid and I the first time it went but resulted in screams of laughter afterwards. By the end of the two hours BattleKid and L were standing under the tipping bucket’s platform allowing the water to splash around them with giggles filling the air!

We did take the boys into the swimming pool beside the toddler pool for a swim and I had BattleKid practicing the latest Waterbabies moves we’ve been learning this term. He is getting more and more confident in the water, his arms are starting to move WITH his legs and he is now (finally) happy to put his head into the water.

We alternated between the swimming pool and the toddler pool and both of us mums commented that even though we were there nearly 2 hours, none of us were feeling cold. Every time we’ve been to the pool at Bluestone we are all feeling a chill after 40 minutes but all of us could have happily stayed in there a lot longer.

Just before our time was up we headed for the changing rooms and showers and this time I used a large normal changing room which had ample room in it for BattleKid and me. Once we were washed, dried and changed I let BattleKid have a ride on one of the kids’ rides while we waited for the others. Next on the agenda was the soft play. Now our 1 hour time slot was booked for 12.30 but we were kindly let in half an hour earlier for our hour of play. We found seats and then W and I took our shoes off so we could chaperone the boys in the soft play.

This was BattleKid’s first visit to a soft play and he had a great time diving into ball pits, sliding down soft slides before both he and L became entranced by a ball funnel. We discovered a tube beside it which filled a bucket above our heads and once the vacuum for the balls had stopped it released them back into the corridor we were in, much to the delights and squeals of the boys. The boys had W and I run ragged but it was great fun and I can now see soft play featuring in our future, dare I say it. Our visit to the LC Swansea was a success. We all thoroughly enjoyed ourselves and even commented that we would revisit the LC in the future when BattleDad isn’t travelling.

I thought I would round up each part separately after a general run down of our visit to the LC Swansea, so here are some more details about the various areas and facilities at LC Swansea:

There is ample parking in the pay and display car park located beside the centre. The left-hand car park was full when we arrived but there was plenty in the right hand car park. We paid £5 for 5 hours as we planned to go for lunch afterwards. There was even still plenty of spaces left when we dropped our swimming bags at the cars after 1pm on a Saturday afternoon. The car park is also within walking distance of the large Tesco in Swansea Town Centre and you can see The Quadrant Shopping Centre from the car park, handy if you fancy a nose around the shops after a swim/play.

The changing rooms are unisex from what I can tell and you need to hand your ticket to the pool reception desk before entering. They give you a wrist band of a certain colour which denotes your time slots and you return that when you are finished. All in all I was very happy with the décor, cleanliness and facilities in the changing rooms. The toddler and swimming pool beside it at LC Swansea was clean, warm and seemed to be well maintained. There were ample lifeguards on duty, all visible by their red t-shirts. The LC Swansea operates a no tolerance to inappropriate behaviour and the lifeguards will pull you up if you do something wrong or inappropriate, as I saw when a group of lads got a telling off from one of the lifeguards.

As mentioned we thought the pool and it’s environment was nice and warm and allowed us to enjoy our two hours without any of us catching a chill. There was plenty for the kids to enjoy in the toddler pool, so much so we had to bride them to get out!

We didn’t get to see much else of the pool as the boys were too young but there are slides, various wave pools, a lazy river and the boardrider for older children and teens to enjoy.

As this was our first visit to a soft play I don’t have anything to compare it to but it was clean, well maintained and parents were allowed to accompany younger toddlers as long as we removed our shoes. I made sure to not get in the way of others enjoying themselves, while still being close at hand to help BattleKid stay out of trouble. There were lots of different rooms, slides and ball pits to enjoy, and again we didn’t see all the areas but those we did we thoroughly enjoyed.

We went into the light and sensory rooms, two different ball pits with slides and a corridor with both a ball vacuum tube and a ball funnel which the boys loved. We could have left them in that particular corridor and they’d have happily stayed there for hours. And I’ll let you in on a secret, both W and I also enjoyed that corridor, joining in on the fun with the boys. All in all it was a very enjoyable and successful first soft play for BattleKid and I. We didn’t use any of the other facilities while we were there but there are two cafes in the LC that look nice. There is a viewing platform above the pools or you can see through to the pool area from one of the bistro cafes. There is also a climbing wall for older children to enjoy. All-in-all, we thoroughly enjoyed our visit to the LC Swansea and plan to return with BattleDad another weekend with our friends, as I’ve mentioned, and make a day of it. It only took us 45 minutes to drive to it so it is well within day-out distance for us. There is plenty to do there with toddlers, young children and teenagers, and of course the cafes are there if you fancy letting the kids play while you relax with a tea or coffee. The whole centre is clean, modern and the staff are very friendly and helpful. This would be an ideal day out for half-terms and summer holidays to keep the kids entertained for a good few hours.

*We were given complimentary entry to the Waterpark and soft play for the purpose of this review. However, all opinions expressed here are wholly my own.

If you do want to visit the LC Swansea you can find details of pricing, opening times and special events on their website.