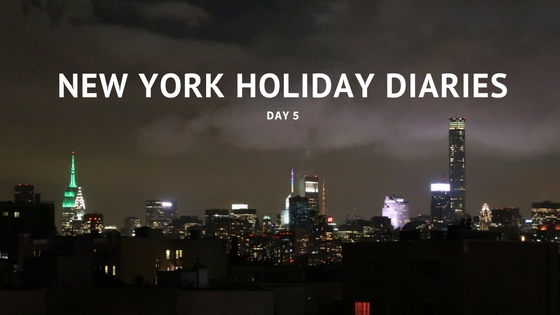 BattleKid woke briefly at 2.45am but he settled back to sleep quickly in bed with me. We both woke just before 6am and we went into the living room to chill on the sofa while we waited for BattleDad to get up.

BattleDad woke at 6.30am and we decided to head into Manhattan one last time as we didn’t need to check out of our accommodation until 12pm and our flight wasn’t until 5.30pm. We thought about doing a bit of shopping but instead went through our to-do list and decided to go get our pictures of the Empire State Building as it was the only thing we hadn’t ticked off our list.

We got the N train straight to 34th Street and managed to find what we’d classify as a real American diner for breakfast. BattleDad was in his element when the waitress came back after bringing our breakfast to top up his coffee. That was the icing on the cake for the trip for him. Simple pleasures. BattleDad had steak and eggs for breakfast, as you do, while BattleKid and I shared pancakes again. We then headed for the Empire State Building and last minute decided to go up. We got our tickets at 8.15am and breezed through the lobby, straight into a lift and up to our first stop, the 80th floor. It was amazing see the New York skyline from above. We headed to the lifts to go up to the 86th floor observatory and again breezed into the lift and straight up. There were absolutely no queues and there was plenty of space in the lifts and on the floors. I’d been warned that the queues can be hours long but we definitely lucked in with deciding to go in as soon as they opened to the public.

Getting our pictures on the 86th floor observatory was a bucket list point ticked and it was yet another great way to view the city, up there with the ferry ride. Unfortunately I didn’t get a picture of the skyline as we were too busy getting a family selfie and capturing some video for my vlogs. Typical! Once we’d gotten all our videos and pictures we headed back down via the gift shop where we bought our fridge magnet (we get one from every new destination we visit). We also got a Christmas tree decoration and a little soft toy for BattleKid too. On ground level I did manage to catch a snap or two of the the Empire State Building. We finally felt like we’d seen as much of New York as we could in the time we had and so headed to the apartment to do our final packing before we started our journey home to Wales. We called an Uber taxi at midday and got to JFK in less than 25 minutes as there was very little traffic leaving the city. It was a different story on the other side of the road I can tell you. BattleKid slept in the taxi and continued to do so when we transferred him to his buggy at the airport. Our bag drop desk wasn’t open until two so we checked in, printed our boarding passes and found a seat.

At 2pm we dropped our bags, headed through security and found a nice restaurant to have our last NYC lunch in. We were slightly disappointed with the small duty free in Terminal 5, so just got some water for the flight and headed for our gate to wait until we were ready to board. Again we were lucky enough to board with first and business class and got BattleKid settled for the flight to Dublin. I had changed him into comfy jogging bottoms in the hope he’s be comfortable enough to sleep. He watched his tablet and ate a little bit of the dinner before we tried to settle him. He did eventually get 2 hours before we landed in Dublin, as did I but poor BattleDad didn’t as he was trying to keep BattleKid comfortable.

Surprisingly the flight was less than 6 hours and we landed in Dublin before 5am. We had to collect our bags and check in again as our flights were booked separately. Once we found our departure gate, I entertained BattleKid to try and let BattleDad get some sleep. He didn’t manage it though due to the constant airport announcements. Our Cardiff-bound flight took off on time at 7.40am and both BattleKid and I were asleep as soon as we took off. BattleKid remained asleep, even after we landed, transferred him to his buggy and then to the car.

We were glad to get home and BattleKid and I went straight to my bed and straight to sleep. New York was done and after a disastrous first full day we still managed to tick off everything we had on our to-do list. Although we were only there for a few short days, it was enough to get a taster of the city, enough to know we will definitely be returning in the future. Has it grabbed me like I thought it would like Paris did all those years ago? To be honest no, it’s a great city but Paris remains my number 1 favourite city. That said, it won’t stop me visiting again in the future.