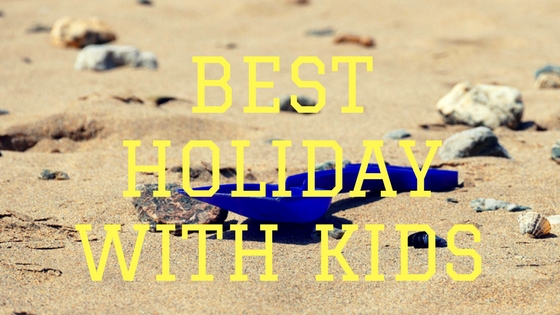 Holidaying with kids can be a daunting affair for some, and something to relish with others. I’ve heard some parents say they dread holidays with their kids. I know others who wouldn’t dream of not going on holiday with their kids. The best holiday with kids can be surprising ones and the worst can come out of something beyond your control. For us, holidays and BattleKid go hand in hand these days and although we’ve had both good and bad, we wouldn’t change them for the world.

As you read this, the Battle Family will be somewhere in North West America on our USA road trip holiday. It’s a holiday we’ve been looking forward to for a while and we’re really hoping it’ll be our best one yet. We’ve done a good bit of travelling with BattleKid, from staycations in the UK, to Europe and beyond. Our best holiday to date has to be our trip to New York last year.

Despite rain on our first full day, it turned out to be our best holiday so far. I wrote all about it in our New York Holiday Diaries and I also showed that New York can be done, even with a toddler in tow. I thought I’d ask some fellow bloggers what have been their best holiday with kids and here’s what they had to say.

Lianne from Ankle Biters Adventures says their best holiday with their kids have been a good old British Haven holidays. Her kids loved the caravan and there is so much to do at Haven for little ones.

Emma from Emma Reed said her best holiday was in Zante last year for her sister’s wedding. It was great

Because so many people travelled out for it and that of course gave me a huge help with my two-year-old.

Her son had so many family members to play with and keep him entertained. It was so memorable for her and not stressful at all.

Beth from Twinderelmo says their best holiday was when they took their kids to Disneyland last Christmas.

To see the magic and joy in their eyes was the most amazing feeling ever.

She will never forget their faces during the parades and believes Disneyland really is the best place on earth.

Angela from The Life of Spicers says their best holiday with kids was to Walt Disney World. The reactions and look on her daughters face when she got to see the castle, and meet the princesses, was amazing. It was worth all the saving and going without to get there.

Samantha from North East Family Fun says their best holiday with kids was to Calella de Palafrugell last year. A traditional Spanish resort, which is not very touristy, but hoem to stunning beaches and gorgeous restaurants, she and her husband would

dine in style as the kids played on the sand in front of us.

Jenna from Then There Were Three says her best holiday with her daughter was definitely Bluestone.

It was last minute and we only found out we were going that day, but she absolutely loved it there as there was so much to do.

Debbie from My Boys Club says their best holiday with kids would be their trip to Loch Ness, which I’ve been reading. Debbie said they had a luxury lodge, fab day trips, the weather wasn’t not bad at all and it was really relaxing.

Adventurous and a good time was had by all – you don’t have to go abroad for the best times.

Richard from 2 Bottles of Milk found it hard to pick one best holiday. So, he chose two. The first one was when they took their two boys to Bluestone two Christmases ago. It was just amazing he says. The second was from this year when they went to Disneyland Paris

Although exhausting, the boys faces during our character meal made the cost of that worth it.

Karina from Mum’s the Nerd says their best holiday was booking a villa in Lanzarote with family.

Having your own pool and the relaxed atmosphere was perfect for us.

Maria from Happy Mummy says theirs was to Puerto Pollensa in Majorca. Their daughter Lily had an absolute ball swimming all day and dancing all night at the mini disco.

We still play the songs all the time at home.

Tracey from Pack the PJ’s said her best holiday was only very recently. They spent just under a week in the beautiful Maldives doing things like snorkelling on the reef, kayaking, night fishing, dolphin boat rides. They even had a professional cooking experience. But more than this, it was

An absolutely amazing few days spent as a family

Not only that but they also spent 3 days in Abu Dhadi, with the highlight being a desert safari where they rode camels, experienced falconry, were driven at speed over sand dunes, saw the sun setting over the landscape and the 45 degree heat.

We loved every second!

Jodie from Maidenhead Mum says their best holidays was a Eurocamp trip to the Adriatic Coast in Italy, staying across the lagoon from Venice. The site they stayed on had a water park, direct access to the beach and was just 15 minutes by boat from Venice.

Seeing as my happy place is taking photos there was something for everyone.

They enjoyed it so much they are going back this year! And she says she has not had a ’worst’ holiday as yet, although wonders if returning to Venice with a 5 year-old and two year-old might tip the scales!

Hannah from Travelling with Leo says their best holiday was a three-week trip to America where they travelled by train between Boston – New York (where they spent Christmas) – Philadelphia.

Lisa from Bare Mother said their best holiday to date was a recent trip to Kefalonia in Greece. They had a private villa with pool, were two minutes walk to the beach with a supermarket on the way, and there were lots of great kid-friendly tavernas nearby.

It was perfect because it was so easy to chill. Mister Two had a fab time, and so did we.

Vikki from Family Travel with Ellie said without a doubt their best holiday was their Disney Cruise around the Med.

It was everything we could possibly have hoped for… we did some excellent excursions to Monaco and Pompeii, as well as enjoying a week in Barcelona before we set sail. Whenever I think of it my heart fills with joy. We look at the photos often.

Emma from Our Fairy Tale Adventure recently did a road trip from the North West of England to Copenhagen in Denmark with their two toddlers. People thought they were a bit mad but it was such an amazing trip. They travelled through so many places and got to experience so many things together as a family.

We then ended our trip at Disneyland Paris, which was just the most perfect way to finish our adventure.

Jennifer from My Mummy’s Pennies said their best was their first trip to Cornwall three years ago. Despite being in April, it was a scorching week and they had the most amazing time visiting lots of different places. Their children were four and seven and handled the long car journey really well. They loved it so much they’ve been back each year since!

Cathryn from Cardiff Mummy Says said their best holiday has to be their trip to Rome this May. She and her husband honeymooned in Italy 10 years previously. They visited the Trevi Fountain and, as is custom, threw in a coin so that someday they would return to Rome.

We joked that we should come back for our 10-year wedding anniversary – with our kids – and that’s exactly what we did. It was so amazing being back there with our three children and showing them all the sights that it made us fall in love with Rome.

The weather was perfect during their trip, the campsite they stayed on was amazing and the Italian pizza, pasta and wine was delicious too.

Alice from Living with a Jude has had both her best and worst holiday rolled into one. She went to see family and friends in the states following several years of trying to get her horrid, emotionally abusive ex out of her life. Her friends out there made the visit amazing and she had such sun seeing them all. On the flip side, her (then) seven year-old severely autistic son was (in her words) a bit of a nightmare.

He had meltdowns every day, wouldn’t stay on the beach, wouldn’t go out, freaked out on the plane. It was horrific!

Thankfully her parents were with her were with her so they were able to maintain a sense of normality for her (then) four-year-old daughter. They babysat in the evenings so she was able to go out, stress-free knowing her ex wouldn’t be trying to ruin her life when she got home. It was the worst holiday because of her son’s behaviour but the best because emotionally she was on top of the world (her own words).

And finally, I wanted to highlight one comment that stood out to me. It is from Lisa who blogs at That British Betty and I have not edited her comment in anyway.

Our best holiday was a few months after my fiancé died suddenly from a virus. I was completely reckless, used the money we’d saved for our wedding to take my two girls to Italy (aged 11 and 14 at the time), stayed in beautiful hotels and spent ten days exploring the islands, travelling on boats, eating with the locals and doing things we’d never dared to before. It was incredibly therapeutic and freeing to travel ‘alone’ and gave us some amazing memories in the middle of a horrendous time in our lives.

From the Maldives and Walt Disney World, to Spain, Italy and staycations in Scotland and Cornwall, these bloggers have shown us that the best holiday with kids can be anywhere in the world. What makes great holidays with kids is the fun everyone has while making long-lasting memories. It doesn’t matter where you are in the world, so long as you are having fun as a family.

Thanks so much to all the great bloggers who shared with us their best holiday with their kids to date. There were so many different destinations and reasons behind the best holidays. What has been your best holiday to date with your kids? Why not share it with us in the comments below.