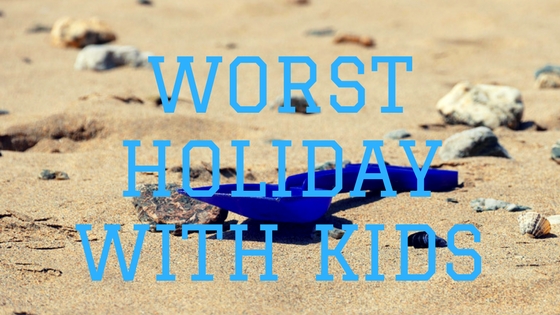 Does going on holidays with your children fill you with excitement or dread? Excitement for the possibilities that lie ahead, or dread of it turning out to be the worst holiday with kids. Yes, sometimes disaster can strike, and there is nothing you can do about it, but often it’s not something we can foresee. For instance, our worst holiday with BattleKid to date is a tossup between our first holiday to Lanzarote with him, and our second.

Lanzarote had been a favourite destination of ours for years. So, when booking a holiday with a one-year old, we thought why not return to the Canary Island of choice. We chose a resort and town we hadn’t been to and it looked great. When we arrived, we knew we had chosen right. A lovely one-bedroom apartment awaited us. Unlike our first holiday abroad with an 8-month old, we could put BattleKid to bed and relax in the living room with Netflix. The resort was very family friendly, and the town was a lovely 20-minute walk from our resort. It really couldn’t have been better. Until disaster struck on Day 5 of our 7-day holiday. Chicken pox was confirmed the next morning and we were grounded for an extra 3 days. Not what I wanted.

We decided that it was just unlucky of us, so didn’t let it stop us booking a return trip to the same resort the next year. However, the very first day we arrived, disaster struck again. This time, we had only just arrived at our apartment, and were leaving to go for a walk, when BattleKid fell. It resulted in a trip to the hospital for four stitches in his knee. It meant no pool time whatsoever for the entire holiday. We’ve now decided we are jinxed with that resort and may not return to it again, despite it being a brilliant resort.

In my previous post fellow bloggers and I shared with you our best holidays with our kids to date. This time I’ve asked them to share their worst holiday with kids to date. Let’s see where and why!

Samantha from North East Family Fun says she generally enjoys Haven holidays, but wasn’t a fan of Golden Sands. Their caravan was dirty and had to be re-cleaned on arrival, the entertainment wasn’t great and it rained the whole time!

Jenna from Then There Were Three says her worst holiday with kids would have to be their trip to Barbados. The hotel was a shambles, and despite saying they were child friendly, the kids club was never open. They were also only informed of a child’s menu on their last night!

Sarah from Mumzilla says their worst holiday was to a holiday apartment in Spain with a then 18-month-old. It poured down all week with rainy. On the only sunny day, their son managed to tip his buggy and smashed his teeth in. They are now growing through stained as a result.

Oh, and the car seat provided for was for a baby, so it was fun cramming him in that one!

Karina from Mum’s the Nerd says their worst holiday was camping in North Wales as it rained heavily the entire time.

Cass from Frugal Family says their recent holiday to Milan has been their worst holiday with kids yet. Even though they had a great time overall it was too much hard work keeping everyone happy.

We booked a family room which meant no-one had space to go for some time on their own, so we were together 24/7 which was not ideal! I ended up refereeing arguments about everything from one child accusing the other of using up all the WiFi, to whose turn it was to go in the shower.

Collette from Truly Madly Cuckoo told us their worst holiday was when their son got airlifted to Bangor Hospital following an allergic reaction to a peanut he only touched at a BBQ.

It was so scary, I dread to think what would have happened if he had actually eaten the peanut rather than just touched it.

He has now been prescribed an Epipen which they carry everywhere.

Frances who blogs at Whinge Whinge Wine says their worst holiday with kids was last year in Majorca. Everyone got food poisoning and said it’s

No fun being puked on by two small children when you’re puking yourself.

It then struck her husband on the flight home, which ended up being delayed hours because they wouldn’t let him travel. You can read all about it in her blog post, aptly entitled Holidays from Hell. What an awful holiday, I think you’ll agree.

Lynne from A Day in the Life of a Mum of 6’s worst holiday with kids is my worst nightmare. On a trip to France, her car engine blew up and it had to be transported back to the UK. Her husband had to fly to London and buy a new car to get them home.

We laugh about it now but it was uber stressful at the time.

Hannah from Travelling with Leo says their worst would have to be their weekend camping at the Curious Arts Festival….

Lisa from Bare Mother told us their worst holiday was a return trip to a 5-star resort in Thailand.

The first time we were pregnant, and the whole trip was bliss – adults only pool, bar/room service to our balcony overlooking the water, afternoon naps, massages and dinner out every night. We tried to recreate with a 6-month-old, and failed miserably. Stuck in our room every night, in the dark, from around 6pm. Rookies!

I know that feeling!

Deborah from Country Heart and Home says their worst holiday was Scotland, where it did nothing but rain torrentially, all week. And when they did venture to the clubhouse, their then 3-year-old jumped into the deep end of the pool and couldn’t swim! The kids did nothing but argue and we were all stir crazy!

The whole week was a nightmare!

Emma from Wanderlust and Wet Wipes had a disastrous weekend in Muscat, Oman during which they all whinged and moaned for various reasons. You can read all about their weekend in the blog post she has written. Not quite the weekend away they had hoped for!

Jennifer from My Mummy’s Pennies is sad to say their worst holiday with kids was Disneyland Paris earlier this year. Their children enjoyed it, and she is glad they got to experience it but

It was such a stressful week that mainly consisted of queuing and we spent 5x what we usually spend on a holiday to do it.

Nikki from Yorkshire Wonders says their worst holiday was their own fault.

We booked a cheapie to Greece. It was 40 degrees, the room had no air-conditioning and there was a motorbike rental business outside our bedroom window.

The bikes revved all night, and if they closed the window to stop some of the noise, they cooked in their room. They even had to shower all through the night just to keep cool. She says it was completely awful and she’d never do it again.

Cathryn from Cardiff Mummy Says told us their worst holiday was a week in her in-laws caravan in Borth. Although they’ve had some brilliant holidays there, for the week in question, it took them 5 hours instead of 2.5 hours to get there due to lots of road works and accidents. I know the road to Borth and can only imagine.

It rained the entire time, the kids fought constantly and the weather meant the TV signal stopped working. We came home early!

Nyomi from Nomi Palony said they saved up for their first all-inclusive holiday at the Costa Del Sol but it turned out that they had booked in the worst weather the region had seen in over a decade! It was torrential rain for the entire week.

To make it worse, Britain was having a heatwave so my feed was full of sunbathing happy brits while we were miserable.

On the way to the airport the baby vomited all over the car that would be left in the long stay airport parking in a heatwave. Once there we went into the city just to buy warmer clothes and waterproofs and somehow lost a 50 euro note getting out of the taxi. The all-inclusive food they saved for was terrible. Then poor Nyomi got a bad case of mastitis that meant she needed to go to a very busy A&E in Marbella. So bad was it, they were so happy to come home!

Zoe from The Tale of Mummyhood says her worst holiday so far was their first as a family of four. Her eldest daughter fractured her leg three days in and a week before her second birthday. She had a bright pink cast covered in hearts. Zoe is still not over the trauma, even though her daughter is brand new!

Alice from Living with a Jude has had both her best and worst holiday rolled into one, and her response has been featured in the previous post as well. She went to see family and friends in the states following several years of trying to get her horrid, emotionally abusive ex out of her life. While her friends out there made the visit amazing, and she had such sun seeing them all, her (then) seven year-old severely autistic son was (in her words) a bit of a nightmare.

He had meltdowns every day, wouldn’t stay on the beach, wouldn’t go out, freaked out on the plane. It was horrific!

It was the worst holiday because of her son’s behaviour but the best because emotionally she was on top of the world (her own words).

As you can see, the reasons for certain holidays being the worst holiday with kids are varied and unfortunately weather plays a big part in it. Searing heat is not much fun with kids (Emma and Nikki), nor is torrential rain which featured a lot.

Before BattleKid came along, BattleDad and I spent a week on the Isle of Man during the TT races. We had glorious sunshine some days. However, on our second last day the heavens opened and dampened our spirits. So much so we found a room for our last night so we wouldn’t have to sleep another night in a soggy tent. I’m not sure I could do it with BattleKid in tow.

What has been your worst holiday with kids to date? Did it involve rain? We’d love to know, so why not share it in the comments below!