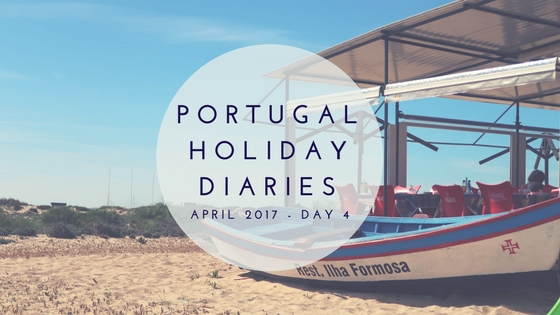 7.30am seemed to becoming a regular occurrence and after having breakfast we headed into Tavira hopeful. We were hoping the ferry to Ilha de Tavira would be running so we could visit the beach.

You see, Tavira is a town on the coast but the beaches of Tavira and surrounding areas are located on islands, separated from the mainland by little inlets of water. It all forms part of a nature reserve called the Ria Formosa and you need to get ferries across the inlets to reach them.

The ferries do not run all year round, and normally only run for May to October. However, thankfully since Easter was later this year, the ferry was running. We got the 10am ferry across, which took 20 minutes to get to the Ilha. We paid for a parasol and 2 beds, costing just €10 and spent a lovely few hours at the beach. BattleKid had a whale of a time playing in the sand, building sand castles, chasing waves, splashing both BattleDad and his Lolo. And as we were there early, it wasn’t too packed. I could see how it might get very busy during the summer months.

We decided to head for a ferry at 1.30pm but had gotten the times all mixed up. It turned out ok as we had a lovely lunch in one of the restaurants on the beach before getting the right ferry back. BattleKid fell asleep on the boat and it was hardly surprising with all the fresh air and fun he had had.

We did a bit of shopping before going back to my parents’ house for dinner and bedtime. Despite his earlier nap he was in bed by 8pm and asleep soon after. We had a lovely day at the beach and can see us spending a lot more time at the beach once we move down permanently.