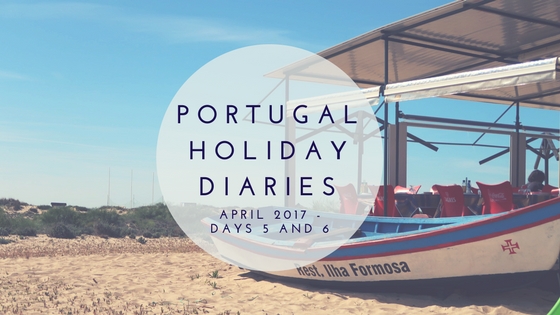 We had an earlier start to the day and had a lovely light breakfast on my parents’ deck of sausage, bacon, eggs and toast. My mum went to Mass for 10am and while she was gone I got stuck into cleaning for her. I thought it only fair since she and my Dad were letting us stay, not only for Easter, but also when we were arriving in May until our own place was ready. While I did that, BattleKid was checking for hares with his Lolo’s binoculars. Once my mum was back, we all got dressed nicely and headed to see BattleDad’s aunt, who had invited us for Easter Sunday dinner. I hadn’t met her before and she and her family couldn’t have been more welcoming. She has been lucky enough to be living near Tavira for 5 years now, having retired down there from Ireland. I met her husband, her two daughters and one of her grandsons. They were all lovely and also very welcoming to my parents who came along for lunch too.

We had a lovely Sunday roast with them and spent a lovely few hours in their company and we all looked forward to seeing each other again once we moved down.

We left their house just after 4pm, and as I thought, BattleKid fell asleep in the car on the way back. Once we got back BattleDad and I started to pack our stuff up. That said, we were leaving behind two bags of clothes to cover us for the few weeks we’d be staying with my folks when we moved down. I was grateful we had the option to do so as the car would be rammed with the dog as well.

None of us were particularly hungry so we had a snack and put BattleKid to bed at 8pm. I had an awful night’s sleep with BattleDad’s snoring which is never ideal the night before travelling.

We were up at 6.15am and had some tea and toast before loading up the car and saying Ate Breve to my parents (which means See you soon in Portuguese). We dropped the car back and were at the airport for 8.15am. Check in was easy, the same cannot be said of passport control in Faro Airport.

Faro Airport is having a makeover, which means departures is crazy at the moment. We spent over an hour queuing to get through security, and had to go straight to our gate as they had called for boarding by the time we got through. We left Portugal in high spirits, knowing that when we returned in 6 weeks time, it would be for good.